The foundation started with a gift of 300 shares of Monarch Machine Tool Company stock valued at $5,136 given by Wendell Whipp, who was the company’s president. Whipp then gave an additional 100 shares of Monarch stock, creating the W.E. Whipp Miscellaneous Fund, a donor advised fund allowing Whipp to recommend grants made from the fund. After Whipp’s death, the fund converted to what was called the General Fund and today is known as the Community Impact Fund.

The Foundation received its first gift from outside of the board of trustees from the estate of John Douglas Long. Mr. Long, a retired farmer, died in 1949 entrusting the remaining $8,600 of his estate to executor, Leo Brandewie. Long’s will requested that the sum “aid, comfort, and benefit all persons resident of Shelby County who suffer from blindness or seriously impaired eyesight.” Following the incorporation of The Community Foundation, Brandewie asked foundation trustees to take over the administration of the bequest. Since its inception, the John Douglas Long Blind Fund has given tens of thousands of dollars in eyesight assistance and treatment to local residents. 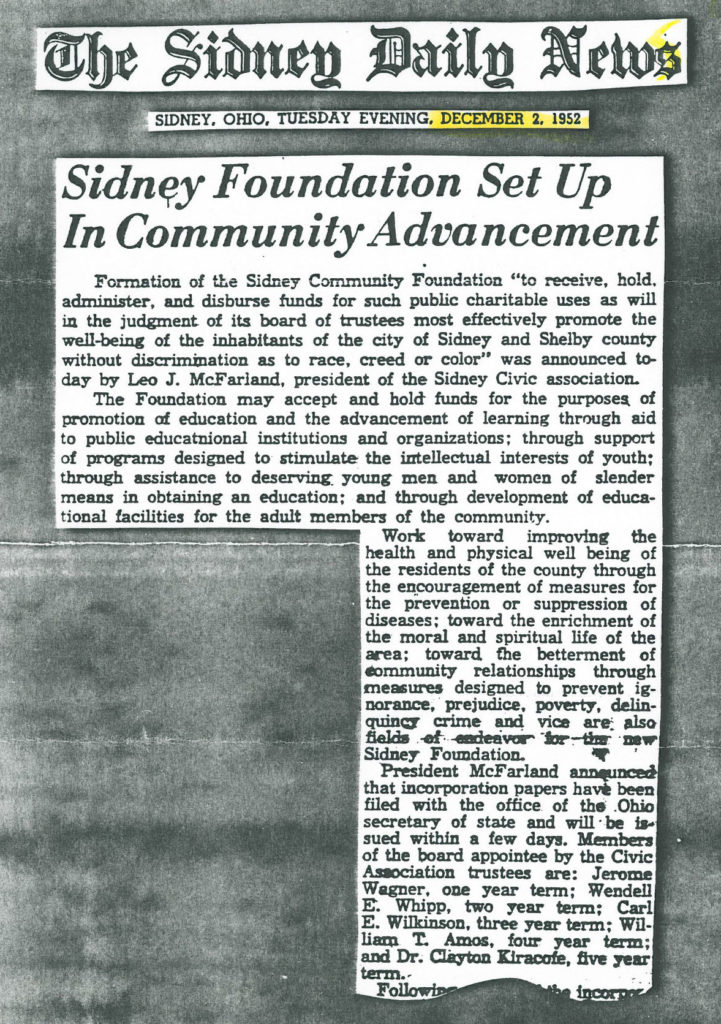 During a mid-1962 meeting, Foundation president Dr. H.E. Crimm suggested sponsoring an oral polio vaccine program. The Sabin Oral Vaccine Fund was immediately established and quickly collected more than $8,600 in contributions for the public. Two polio immunization clinics, staffed by a number of doctors, nurses, pharmacists and youth and adult civic groups, were well attended by county residents.  Several articles and letters of praise were printed in the Sidney Daily News .

County villages also used the Foundation for specialized charitable funds. The Botkins Community Fund, established in 1969, initially provided grants supporting projects such as the community park and swimming pool, but later transitioned to a scholarship fund. The Jackson Center municipal pool was built in the late 1960’s with money received and disbursed by the Foundation’s Jackson Center Swimming Pool account. After the pool’s construction the Foundation deeded it to the Village of Jackson Center for operation and upkeep.

The Foundation made educational loans from its General Fund for the first 24 years of its existence. Then in 1976, a bequest from the estate of long-time teacher Lola Detrick Carmony established the first fund solely for the purpose of scholarships.

Community Foundation grants helped local organizations preserve history. A Self-Guided Walking Tour brochure produced by the Chamber of Commerce in 1977 featured line drawings of historic buildings and homes in Sidney and include brief descriptions of the architectural features of each structure. The Foundation also gave a $3,500 grant in 1978 to help the Shelby County Historical Society purchase the former Water Works building on Brooklyn Avenue. The Water Works served as the Historical Society’s home until the group purchased what is now known as the Ross Historical Center.

From 1952 to 1998, the Foundation was administered by local attorneys including Leo McFarland, Jack Garmhausen and Eugene Elsass.

In 1998, following a strategic planning process involving community leaders, trustees Donald Bensman, Richard Henke, Patrick Milligan, Sandra Shoemaker and Herbert Schlater decided the Foundation needed an office and staff of its own. Marian Spicer was hired as the Executive Director to begin on Jan. 1, 1999 and the office opened in Courtview Center in downtown Sidney. In 2001, other staff positions were added, increasing the capacity and specialization of Foundation work.

The Foundation began assisting with community capital campaigns in 2002 when the Sidney Memorial Stadium Fund was established. Since then, many sports, recreation, arts and community service project funds from throughout Shelby County have been administered at the Foundation.

By 2010, the Foundation administered 136 funds valued at $16.4 million. By 2020, more than 200 funds are administered with assets in excess of $35 million. The Foundation continues to grow and innovate. It remains the only community foundation serving Shelby County, Ohio.

Match Day, intended to celebrate the Foundation’s 65th anniversary by giving away matching money of $65,000, raised awareness of the Foundation and enthusiasm for giving to 13 local organizations whose Organization Funds were administered at the Community Foundation of Shelby County. It exceeded expectations by raising over $235,000. Local philanthropist Dave Ross made the event annual by offering sums that could be matched by participating organization donors. The event continues to grow with more 501(c) (3) charities creating Organization Funds and participating in Match Day.